Keeping Voles out of your yard

Voles are curious animals that love to dig tunnels through the earth, often positioning them to wreck your lawn or garden. Having control over the vole population in your yard is vital because their digging can quickly damage your grass and other plants.

First, voles typically dig runways along the surface of your yard, and they don’t frequently dig very deep. Vole tunnels are normally on top of the soil, as they dig through the grass to find food. Vole runways measure about an inch and a half wide and they sometimes burrow deeply into the ground to build homes. Some voles will burrow to a depth of around 12 inches into the ground, while others prefer staying near the surface. The grass or vegetation along the length of these tunnels will normally be cleared out by the vole, as they like to keep their runways as unhindered as possible. For example, any unclipped grass near the runways is left to create shelter for the tiny animals.

It’s hard to control voles once they begin to populate your yard. The way they tunnel through the ground makes it difficult to track them and even harder to catch them using traditional mechanical methods like traps. But this doesn’t mean it’s impossible. Voles are actually relatively easy to catch if you have the right strategy in place.

The best way to get a vole problem under control is by calling a pest control company to assist you. Pest control technicians understand how to investigate an area suspected of housing a vole infestation and have the knowledge and equipment necessary to eliminate the problem. In most cases, OMNIS pest control will recommend mechanical methods, like trapping, but during our inspection process, we will determine which removal method fits your situation best. Call now to schedule an inspection.

Voles may live in the ground, but they aren’t impossible to spot if you know what to look for. To locate their runways, pull back can ground cover that overhangs an area where you suspect voles may be traveling through. If there are fresh grass clippings and greenish-colored droppings present near any runways that you find, that means voles are likely active in that tunnel. Older droppings fade in color, turning brown or gray, so their presence will alert you to keep looking for voles elsewhere.

Here are some interesting facts about voles that you may not have known about:

Voles eat a variety of different plants; they primarily enjoy grass, grass roots, and forbs. In the summer and fall, they store caches of seeds, tubers, and bulbs which they can eat during the winter. If other food sources are scarce, voles may also eat bark or grain crops. Voles are not specifically herbivores either, as they will on occasion eat snails, insects, and the remains of dead animals.

Voles are ground-dwelling rodents that are between 5 and 7 inches long. Their bodies are short and stocky, and they have short legs and short tails. Adult voles are typically brownish-black, with a gray underbelly. Unlike adults, young voles are completely gray and have less fur. Voles do not hibernate, and they are semifossorial, meaning they construct many tunnels and surface runways with multiple entrances. A single network of tunnels may house several nests containing adults and young.

Voles live in grassy and weedy areas, like fields and hillsides with heavy ground cover. Streams, orchards, pastures, and fence rows are also suitable habitats for the most common vole species. Due to their love of grass, sometimes voles will also invade your lawn or garden.

Voles, unlike many mammals, are monogamous. That means they mate for life and form bonds that involve more than just breeding. They are also some of the most prolific breeders in the rodent family, as they can produce as many as 12 liters annually. Each litter has 3-6 offspring, meaning they can quickly populate your yard. 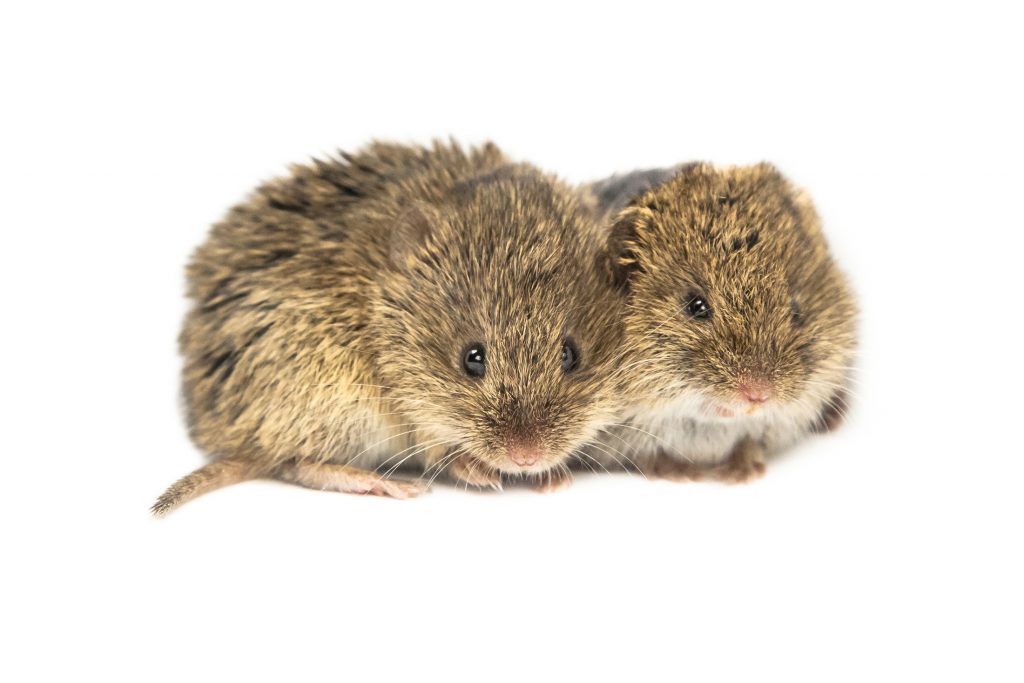 Voles are not dangerous animals, but they can cause immense damage over time. Meaning, vole control is still essential for your property. They mainly feed on grass and grassroots, so they can eventually ruin your entire yard if you do not see them. Furthermore, their tunnels may destroy the roots of plants and prevent grass from growing in certain areas. If you notice voles living in your yard and want to minimize damage, your best bet is to schedule an inspection with your local pest control service, like OMNIS Pest Control. Our skilled technicians will assess your property to determine how many voles are present, then present you with the most efficient vole removal strategy.

If you are trying to identify vole runways in your yard, here are some tips that can make the process easier for controlling voles:

Get Voles Under Control

Don’t let voles destroy your yard. Contact a pest control specialist today to get your vole problem under control. Simply fill out the contact form at the bottom of this page to get in touch with one of our representatives.